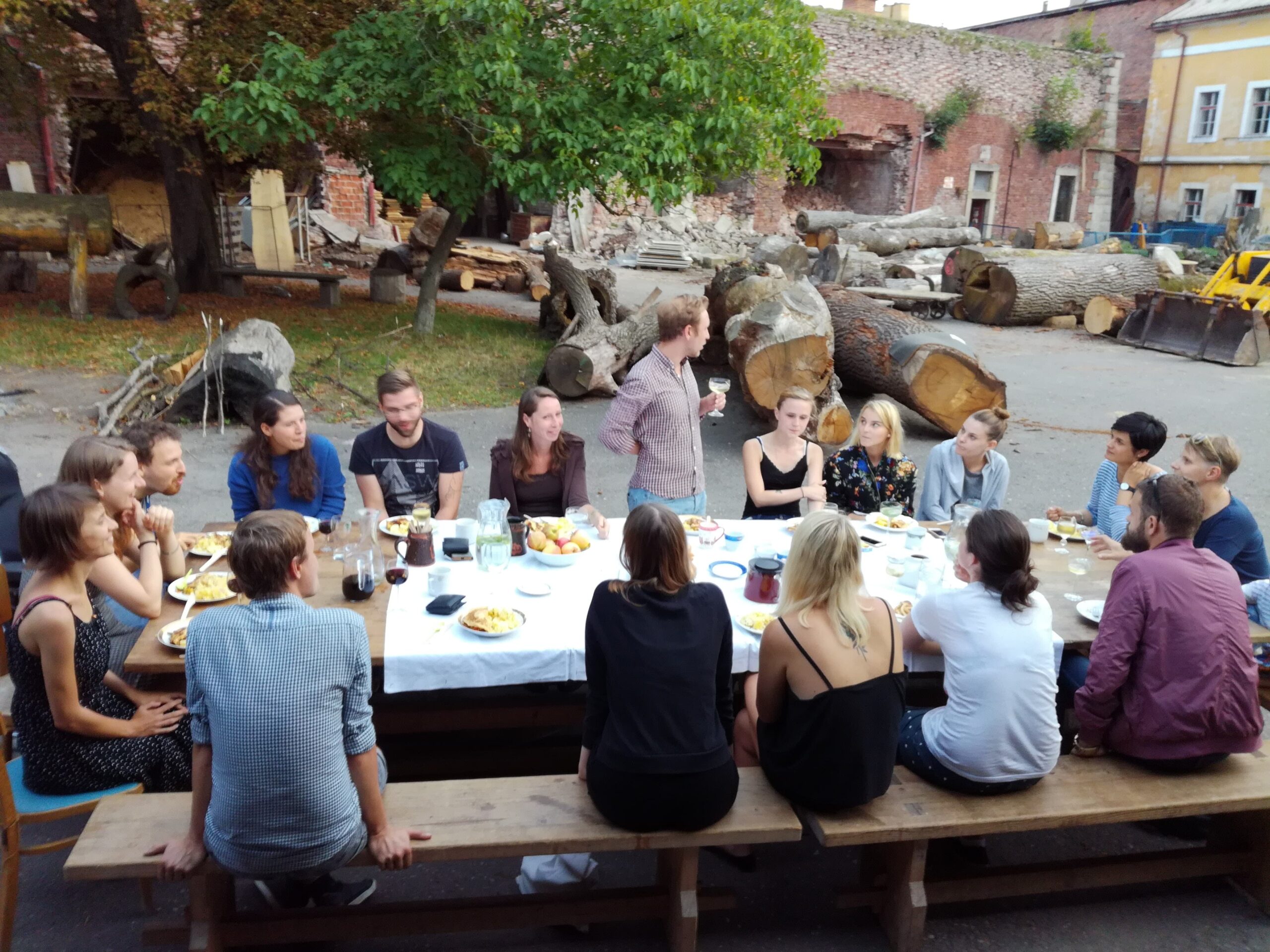 The international interdisciplinary workshop was organized by the Department of Theatre Studies, Faculty of Arts, Masaryk University in partnership with the Palacký University in Olomouc and the University of Warsaw. The workshop was focused on relations between cultural performative actions and rituals and the public sphere. Methods from theatre and performance studies, cultural studies and anthropology are taken as a starting point for interdisciplinary exploration of the topic. Three mixed Czech and Polish working groups spent three days of intensive collaboration to share knowledge on a) anthropology of protest movements and it’s the theatricality, b) ethnographic field work and participatory communal activities, and on c) aesthetical (theatrical) framing of social conflicts. All three themes was introduced by a keynote from an expert and reflected in final general discussion.

What Was the Aesthetics of Folk-Politics?

Václav Magid is a writer, visual artist, curator and editor. The scope of his interests covers the relationship between aesthetics and politics, the role of conceptual tendencies in contemporary art or the legacy of aesthetic theory of Frankfurt School. He holds a teaching position at the Faculty of Fine Arts of the Brno University of Technology.

The term “folk politics” has been recently introduced by Nick Srnicek and Alex Williams to describe a prevailing leftist tactic at the beginning of the 21st century, with its dominant focus on direct action, horizontalism and local solutions. While the hegemony of folk politics begun with the rise of alter-globalism in the nineties, its decline has been represented by the failures of the Occupy Movement after 2011. The seminar will be based on a hypothesis that most of participatory and politically engaged art of the last two decades can be placed in the framework of “folk politics”, which will consequently allow us to apply aspects of its political criticism to the domains of aesthetics and art. Nevertheless, the large part of the seminar will be devoted to exploration of competing theories which have been used to conceptualize participatory and activist art of this era – from Nicolas

Bourriaud’s “relational aesthetics” through Grant Kester’s idea of “dialogical art” up to Claire Bishop’s accentuation of “dissensus” and antagonism, rooted in philosophy of Jacques Rancière. The ultimate failure of the promises of the “folk political” participatory art and the consequent turn to the art of “platforms” will be approached through the analysis of differences between the 7th and the 9th Berlin Biennials.

The seminar focused on study of culture of protest from a sociological, anthropological and media studies perspectives.

One part presented theoretical approaches to protest. What is a protest? The different kinds of protests. From pressure politics to prefigurative politics.

Second part deal with methodological approach to study protests. The students will learn and practically apply qualitative research methods (participant observation, interviews, media analysis etc.). We analyzed particular forms of theatricality and media representations of protests, e.g. counterculture of the 1960s and the alter-globalization movement around the turn of millennium.

sistant professor at the Faculty of Fine Arts at the Brno University of Technology. In 2009 obtained a post-doctoral scholarship for the research on collaborative and participatory arts which resulted in a monograph entitled Umění spolupráce (Art of Cooperation, 2011) (The art of collaboration). His following book Minulá budoucnost / Past Future (2013) focused on the search for utopian potential of modernity in contemporary art. In 2008-2010 he was active as a curator at Galerie mladých (Galery of Young Artists) in Brno; and curated thematic exhibition Re-romantic (2009), Horká linka (Hotline, 2010), Vzpomínky na budoucnost II (Memories of the Future II, 2013), Apocalypse Me (2016) and Letting Go (2017). Jan Zálešák is also a member of Skutek Association and Are (are-events.org) Association.

The aim of the lecture is to offer a background for Václav Magid’s seminar entitled What was the Aesthetics of Folk-Politics? It will introduce several “case studies” – examples of artistic projects that declare the intention to achieve a change in the social fabric, in the way how politics is done, or how wealth and power are distributed, ranging from the early 1990s ‘new genre public art’ (Suzanne Lacy) or ‘relational aesthetics’ (Jens Haaning) to recent efforts to re-invent political art (Jonas Staal).

Towards an Alternative Social History

In my presentation I will show how the unnoticed traditions of social selforganization born in rural Poland may reveal deep conflicts embedded in Polish society during the last decades. I draw on something that could be called “the culture of shaming” – a perspective that appears where modernizing discourses on Polish society are confronted with the cultural experiences of Polish farmers and villagers. I subsequently explore several possible ways of going beyond this perspective: turning to the world of rural social subjectivity as it emerges from artistic and ethnographic projects, investigating the conditions of belonging and the possibilities of performing an ‘inward turn’, and exploring the potential to construct an alternative understanding of society – a proto-sociology. In my argument, artistic projects are linked with ethnography, and above all with the possibility of revealing an alternative social history, capable of reversing the fixed assumptions about the contemporary Polish society. The presentation will include a display of film materials.

We use cookies on our website to give you the most relevant experience by remembering your preferences and repeat visits. By clicking “Accept All”, you consent to the use of ALL the cookies. However, you may visit "Cookie Settings" to provide a controlled consent.
Cookie SettingsAccept All
Manage consent

This website uses cookies to improve your experience while you navigate through the website. Out of these, the cookies that are categorized as necessary are stored on your browser as they are essential for the working of basic functionalities of the website. We also use third-party cookies that help us analyze and understand how you use this website. These cookies will be stored in your browser only with your consent. You also have the option to opt-out of these cookies. But opting out of some of these cookies may affect your browsing experience.
Necessary Vždy povoleno
Necessary cookies are absolutely essential for the website to function properly. These cookies ensure basic functionalities and security features of the website, anonymously.
Functional
Functional cookies help to perform certain functionalities like sharing the content of the website on social media platforms, collect feedbacks, and other third-party features.
Performance
Performance cookies are used to understand and analyze the key performance indexes of the website which helps in delivering a better user experience for the visitors.
Analytics
Analytical cookies are used to understand how visitors interact with the website. These cookies help provide information on metrics the number of visitors, bounce rate, traffic source, etc.
Advertisement
Advertisement cookies are used to provide visitors with relevant ads and marketing campaigns. These cookies track visitors across websites and collect information to provide customized ads.
Others
Other uncategorized cookies are those that are being analyzed and have not been classified into a category as yet.
ULOŽIT A PŘIJMOUT